I hear the client’s step on the wood stairs. He’s coming up.
I check the hour; he’s perfectly on time as usual.
I did a good job. The graphic work I’m about to show him is modern, refined and thorough down to the last detail.
If he chooses option two out of three, I’ll publish it on “Behance”.
The other two… I’m not sure, we’ll see…
Right before the doorbell rings, the coloured pile of Post-it notes laying kind of hidden in a corner of my desk catches my eye.
It won’t be another strange request making me write a note about “things you should never say to a graphic designer”, will it?

“Listen, Luca, I really appreciate your creativity, I like your style and the font you chose but … I don’t know … I’m not 100% sure about the colour. And these empty spaces, well, I would reconsider their size and proportion. It’s just my opinion but you decide… you’re the designer!”

– some minutes later, when I’m alone in my office-

“Fine, let’s take a Post-it, I’ll pick a pink one today. Let’s put this nice new request on the list of frustrating things to say to a creative professional! …”You’re the designer” …

Things you should never say to a graphic designer

10 years of bloomers between laughter and tears

That’s how the series #neversaytoagraphicdesigner came up in July 2014. Since then, it’s gone viral. Platforms for graphic design, social networks and specialized or non-specialized blogs have been discussing and spreading it. It consists of a list of the oddest requests half-hilarious and half-ridiculous made to graphic designers from all over the world. They usually come from inexperienced clients in graphic design.
Luca Masini from Zerouno Design has turned the funny requests into a series of modern captivating graphic works, developing an idea he and his former colleague Mirko, illustrator and graphic designer, had some years ago. 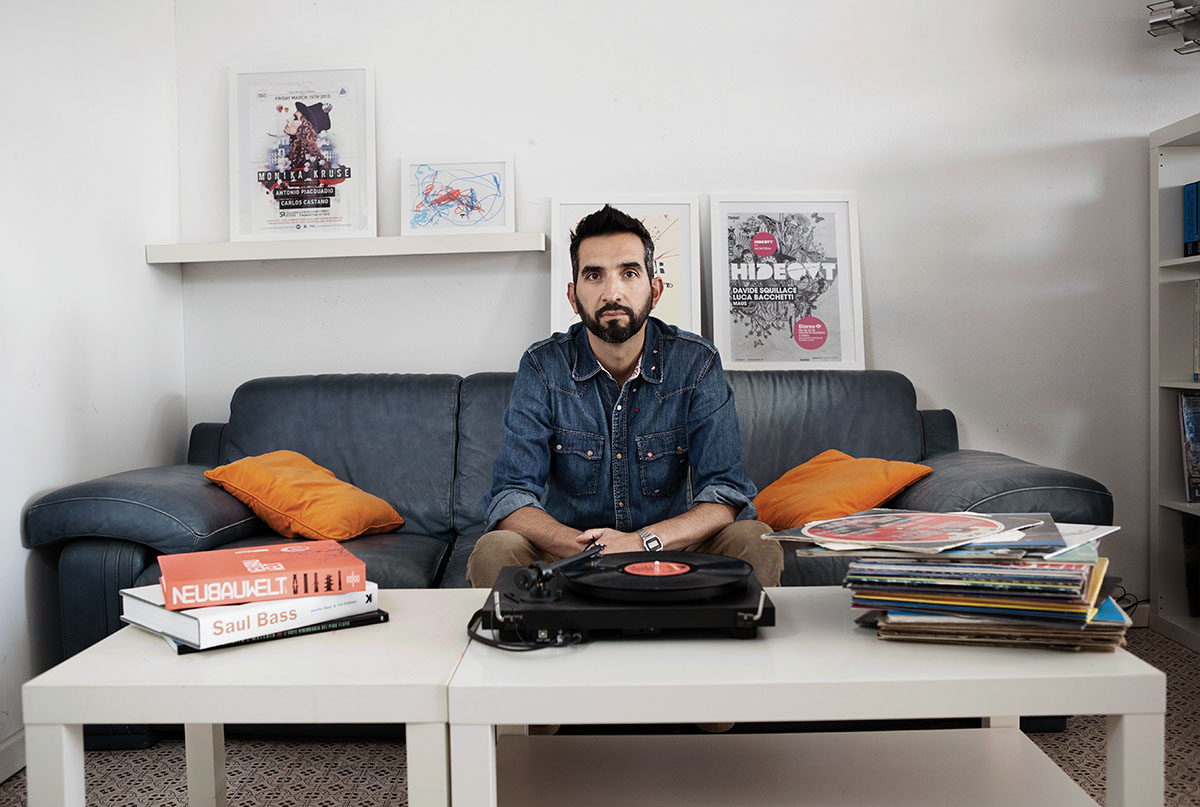 Luca works in Ponsacco (Pisa), in one of the many offices built in the former Sala Mostre di Arredamento, an exhibition and design hall. It is quite common here, in Ponsacco and Perignano, to work in such a location.
Despite the economic crisis, both towns were and still are wood working areas, where you mainly produce furniture.

Luca is kind, peaceful, introverted. He speaks few words and his wandering creative mind is constantly traveling with imagination.
Once he used to be a deejay. Few lucky ones had the chance to listen to him playing, to come to know his research and his extreme sensitivity for music.
If you drop in his office today, you’ll find him working in silence, carefully looking for the right font among hundreds similar ones.
You’ll see him trying again and again different colour combinations till he finds the one that better suits the project he’s working on.

From the desk to the web: a Post-it note travel

# neversaytoagraphicdesigner and # neversaytoaphotographer (in cooperation with Picame) are stories about creativity and people who don’t take themselves too seriously. Some years ago, this intuition could have been shared just among friends or graphic designers working in the same city. But now the web has brought it into prominence. 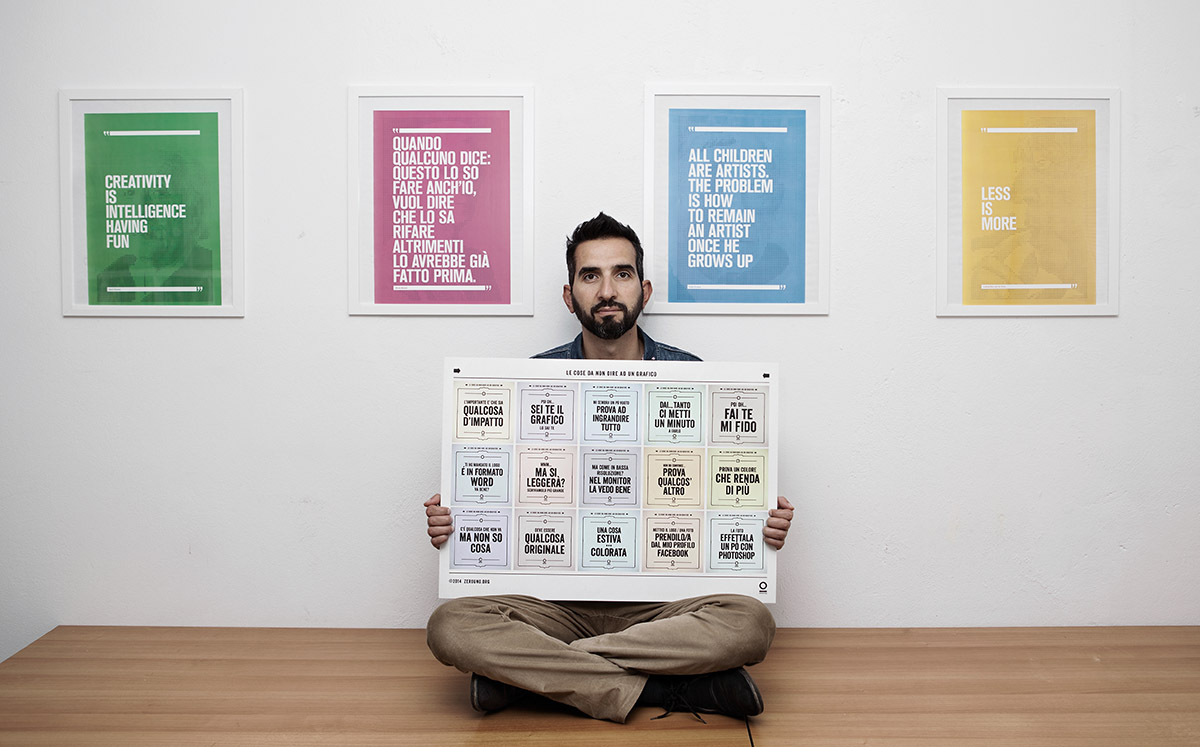 The series of graphic works started for fun.
“Why not check if colleagues from other parts of the world get the same odd requests from their clients?”
But it was also desperation that made the work start.
Actually, Luca used to feel frustrated about people not appreciating creativity and underestimating professionalism, thinking that anybody can be a good graphic designer, a good trainer, a chef or a photographer. A quite common trend in Italy.
“I know exactly what it takes to promote my company; I know exactly how the campaign should look like!”
Many clients are sure they do, they’re sure they don’t need anybody else’s creative ideas or point of view on the matter.

Made in Italy is creativity

Can you speak about “Made in Italy” for the service provided by a graphic or web design agency?
Sure.
Italy is design, fine taste, style, creativity. No matter if it’s a fashion dress or the red car that’s made the whole world fall in love with it.
You can recognize the same Italian values in any product.
Also in some new graphical concepts surprising people and making them say “Man, I was told the same!” or even worse: “Man, it’s exactly what I told my provider.” 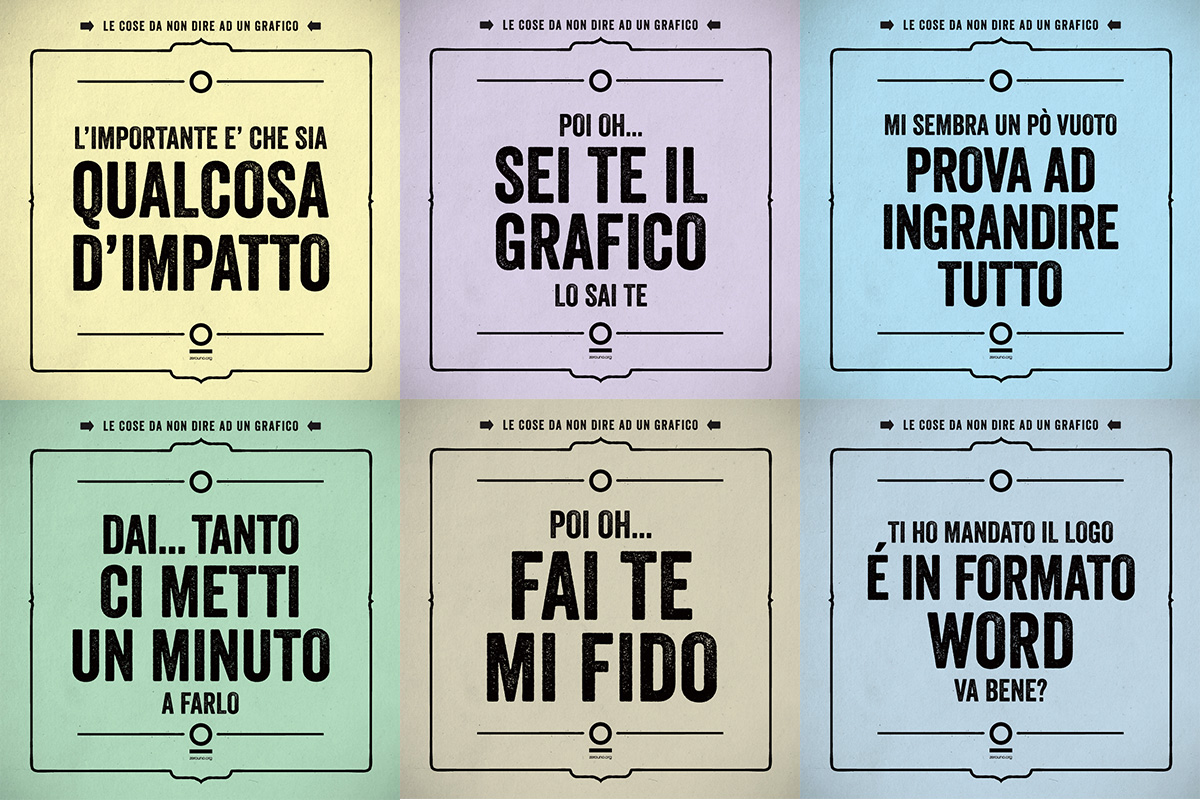 The series #neversaytoagraphicdesigner spread quickly, at first thanks to friends’ sharing, liking on Facebook and retweets, then through communication agencies and big platforms such as Behance, Picame and others. Even Adobe Italy “took the trouble” to share such an original idea on its social network pages.

Here are some rough data showing how successful the operation was on the web: 86 specialized blogs from different countries of the world shared the series; the number of viewers grew from some hundreds to 10.000 a day.
***
The story goes on.

There are specific downsides, a list of clients’ typical “bloomers” and crazy requests in every professions.
Maybe in the future some other professional categories, besides graphic designers, photographers and deejays, will be willing to share their specific “sector misunderstandings” telling about it in the Italian style and with Italian sense of humour.
Here’s Luca Masini’s website zerouno design. Take a moment and get inspired.