A hectare and a half of happiness. And experimentation

Producing wine in a patch of land in Tuscany, one of the best for weather conditions and land quality in the Region and in Italy.
Going back to the roots: back to nature and family values.
Experimenting as the “must-have” quality and the main value.
These are the keywords to the Prato al Pozzo Wine Company.
You could go further describing their work as “alchemy”, and it wouldn’t be overdoing it.Il lavoro sempre sognato

Fabio and Francesca are together in life and at work.
They come from different starting points and different backgrounds, but they share one common objective target: to get back to a work dimension that better suits their view of life.
A dimension to which both contribute following their gut and instinct.

Francesca “wears the pants”. She does, not only because she rules the company, she’s in charge for logistic and publish relations, for the commercial part and for purchases.
She wears the pants because she’s a mother at the same time.
Juggling work and family is difficult, especially with two daughters, a teen and a preteen one. Chapeau! To her and all women professionals! 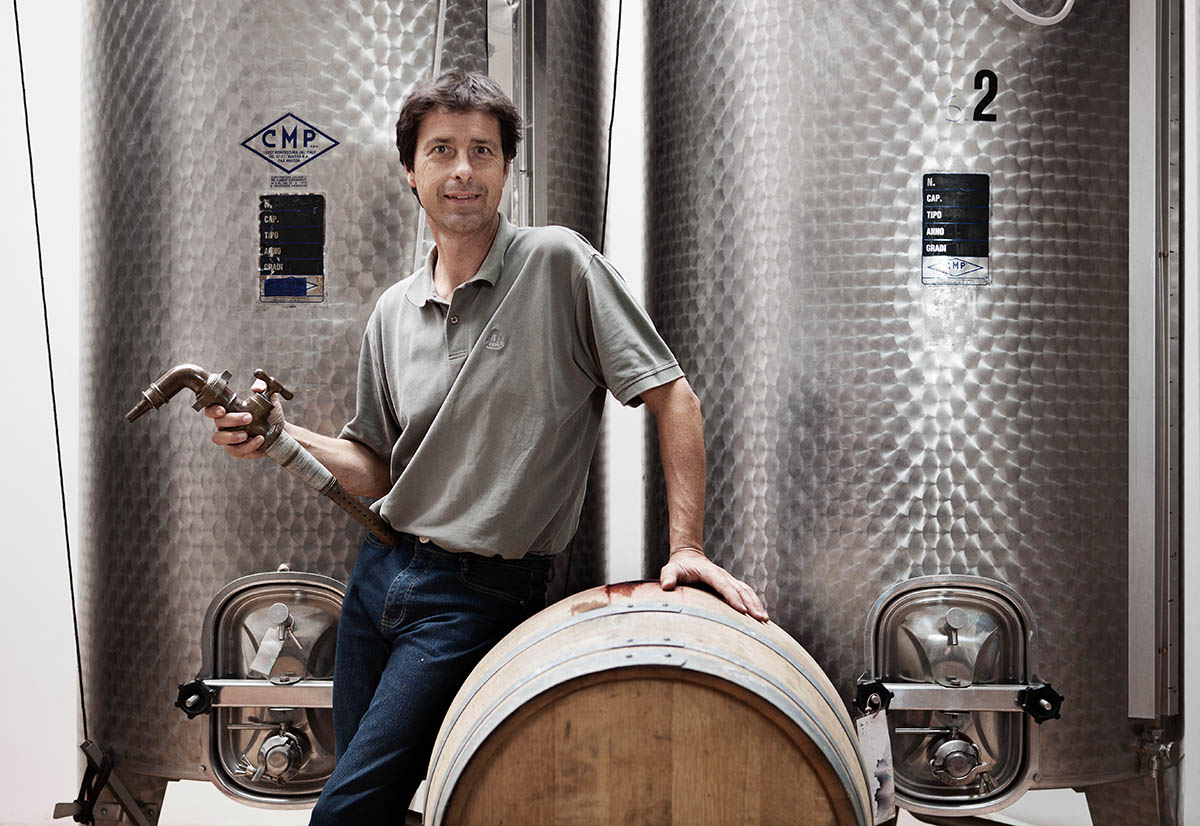 Fabio’s main task in the company is to share his wide experience, which he gained working for years with Made in Italy products at the highest levels. In fact, he’s been the Director of the wine companies Antinori Pian delle Vigne (in Montalcino) and Le Mortelle (in Castiglione della Pescaia).

I’ve rarely met people taking on big responsibilities and carrying them out with a child cheerful smile on their faces. Fabio is one of them. Satisfaction is written in his eyes. You can tell he’s proud of producing a “brave, precious, free” wine, breaking from the logic of profit.

Prato al Pozzo is the story of life circles crossing

It’s no coincidence that circles are an essential part of the brand.
The first circle represents Francesca and Fabio’s dream: producing their own wine and going back to a lifestyle closer to nature.

It was mainly Francesca, whose previous work as an educational designer at Confartigianato was so far from nature, who felt the need to go back to it.

The second circle represents the friends and people who influenced their project: Olle, Ulla, Massimiliano and Annalisa.

Olle Anderson, designer, lives and works in Goteborg, but he drops in Italy, mainly in Tuscany as soon as he can.
There’s a hill dedicated to him and his wife Ulla, at Prato al Pozzo.
Well, actually Olle has earned that hill by renting it as an artist.
Only a brilliant creative mind like his could find such a distribution system. 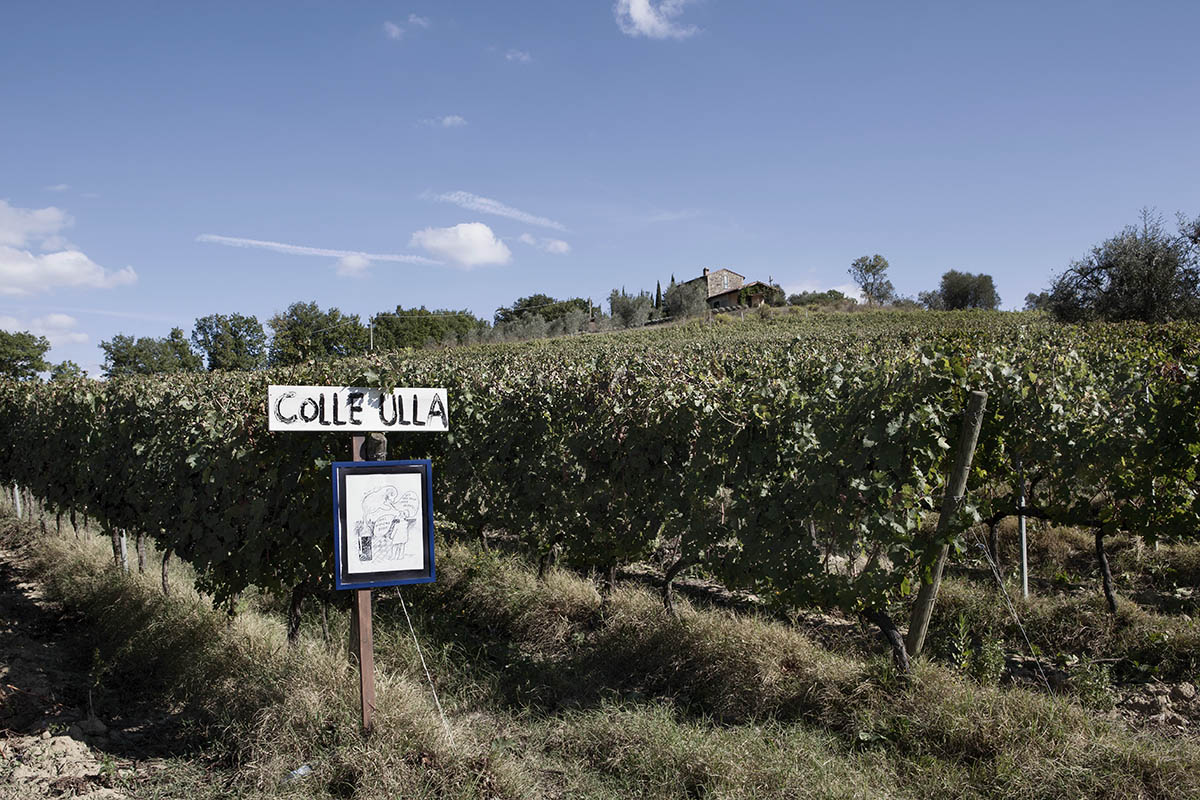 Not only has Olle created Prato al Pozzo labels and logo, but he also was their first contact with Sweden for the wine distribution.
He started with 52 bottles of this fine wine from the Maremma, giving them out as presents, sharing them with his friends and acquaintances, offering them to clients, colleagues and artists.
In the blink of an eye, those 52 bottles turned into 104, 520 and so on.
An export business doesn’t always start with commercial purposes.
It sometimes comes spontaneously, from sharing good moments or artistic experiences.

Massimo Vannucci has also made a significant contribution to the project. He’s a Fabio and Francesca’s long-time friend and the owner of an important architecture firm and a modern art gallery in Pistoia.
He brought art to the vineyards placing some works by Fabio De Poli there for some days; those works must have “breathed” the true essence of the grapes.

You can fall in love with a wine for a thousand reasons.
The land it comes from, the time, the courage it has taken to get its unique taste and fragrance, different from all other standard wines on the market.
The Prato al Pozzo quality excellence is a poem made of places, tastes, determination and great desire to experiment.
This is Made in Italy.
Can’t argue with this. 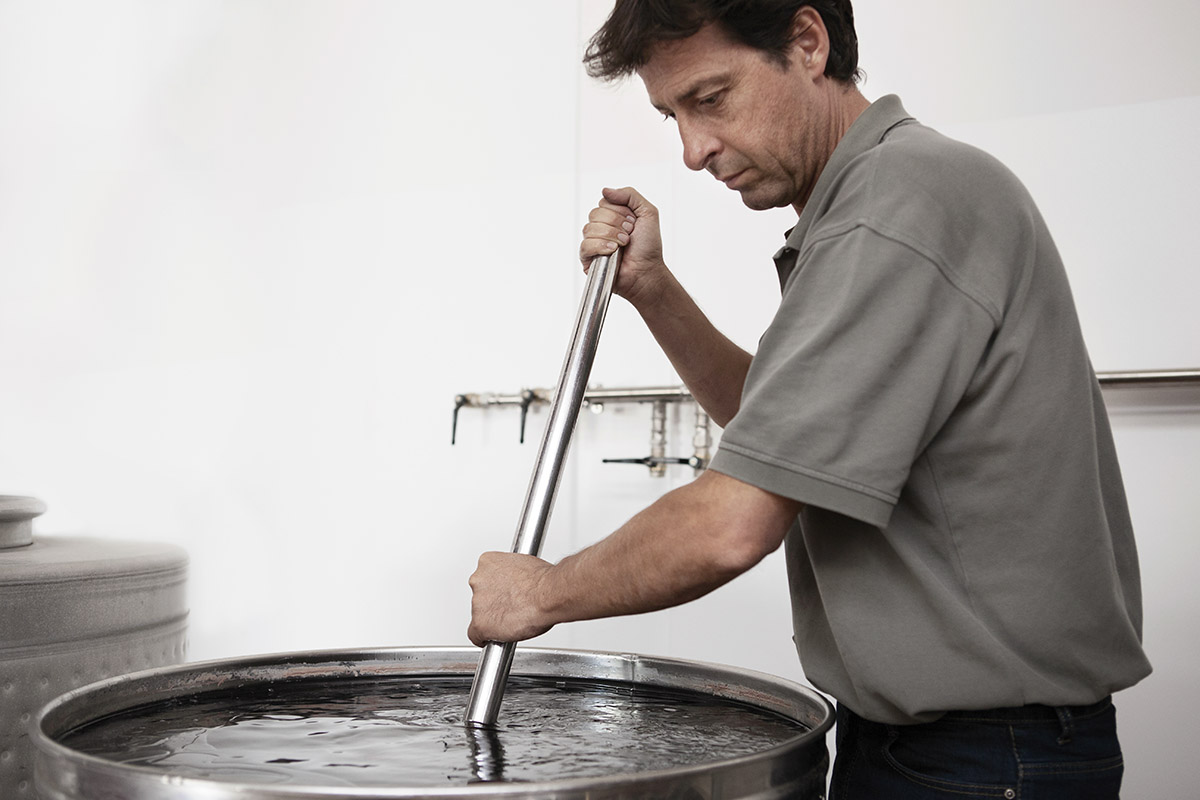 Sometimes the rhythm can be very fast, now and then time seems to stop here, in this hectare and a half of vines in Cinigiano, Montecucco, on the slopes of Monte Amiata, 15 km from Montalcino and from the sea, where the Maremma joins sea and mountain together, between Grosseto and Siena.
Fabio is the one who manages time, deciding how fast, constantly or changeably the hourglass must run.
Time is such an important variable in the production process of Prato al Pozzo wines like Arpagone, Piede Rosso and the white Vermentino!

Can a wine tell something about the business philosophy of the company? Definitely, according to me.
The Piede Rosso wine strongly represents the Prato al Pozzo company vision. This wine is a radical challenge every year, starting from the grapes used to produce it. 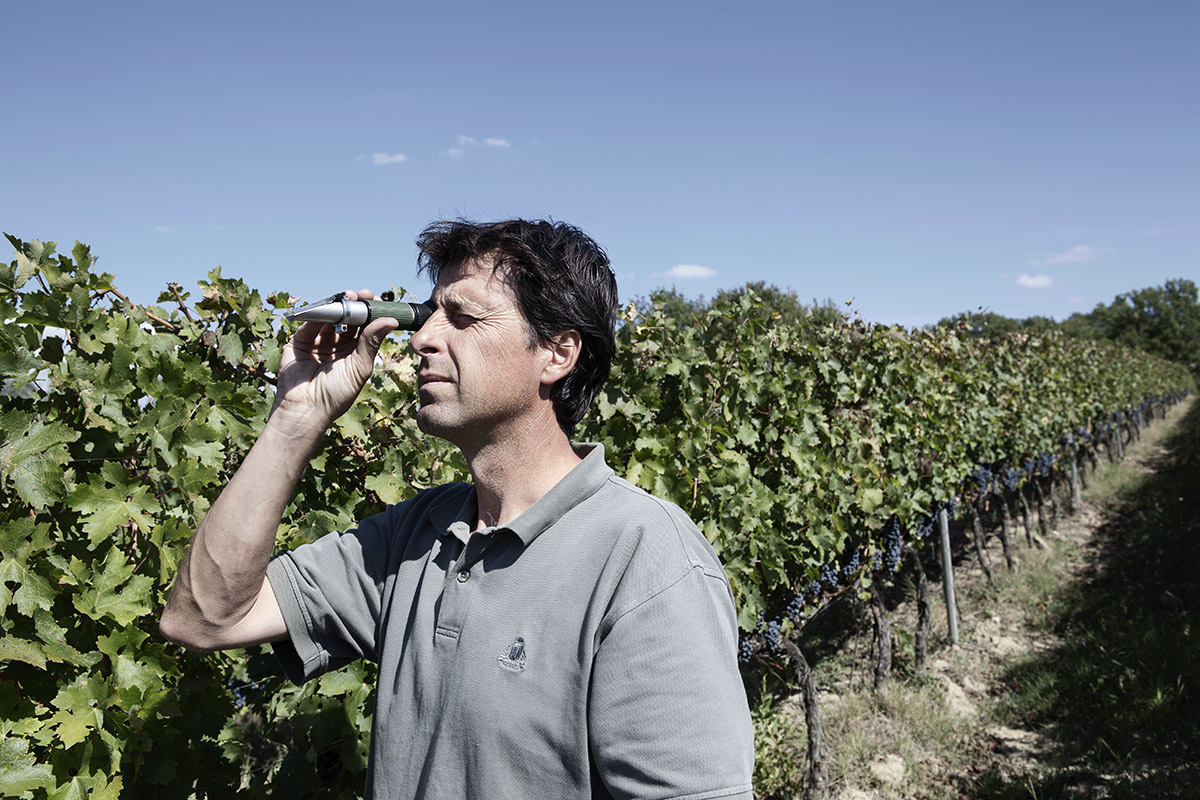 It’s a pure Cabernet-Sauvignon with a natural aggressive, big, rich character. The target, which was reached, was to make this wine balanced, round and full-flavored.
It takes more than planning everything beforehand and assessing the amount and balance of the raw materials to produce such a wine.
Fabio’s experience and knowledge have been the key to excellence in wine
production.
A free and magical approach to work: a real alchemy.

The main elements involved are earth, wood, steel and glass. The process starts from the earth, with a careful selection of the grapes.
Afterwards the wine is kept in oak barrels, then in steel and finally in glass.
This is how you “square the circle” at Prato al Pozzo’s.

The wine processing “journey” usually lasts three years. But it’s not enough, sometimes.
The wine won’t leave the cellar ‘till it’s ready, till it fully meets Fabio and Francesca’s standards of excellence (not the market ones).

Dogs barking, paintings hanging in the vineyards, the majestic Monte Amiata in the background and silence spreading over this corner of paradise.
There’s no rush at all, true excellence can wait.