The English doctor who landed in Genoa

Way back 1896, a midlife English doctor landed in Genoa. He was quite educated and romantic, but very adventurous and visionary at the same time. He wanted to import the football culture and fascination in Italy.
Not to be nostalgic or old-style about it, but nowadays it’s really funny and exciting, to hear talking about culture and history related to football.
Well, it obviously depends on the point of view.

One day you happen to land in Genoa too, right there where the English pioneer founded the first Italian football team, and you find out about a project by three people, three dreamers, three lovers of real football. For years, they have been ambitiously trying to build a bridge between today’s world and the world of the end of the XIX century. This “bridge” has become a company that could have no other name but “Spensley”, the doctor’s name. The three dreamers we’re talking about are Lorenzo, Maurizio e Davide. 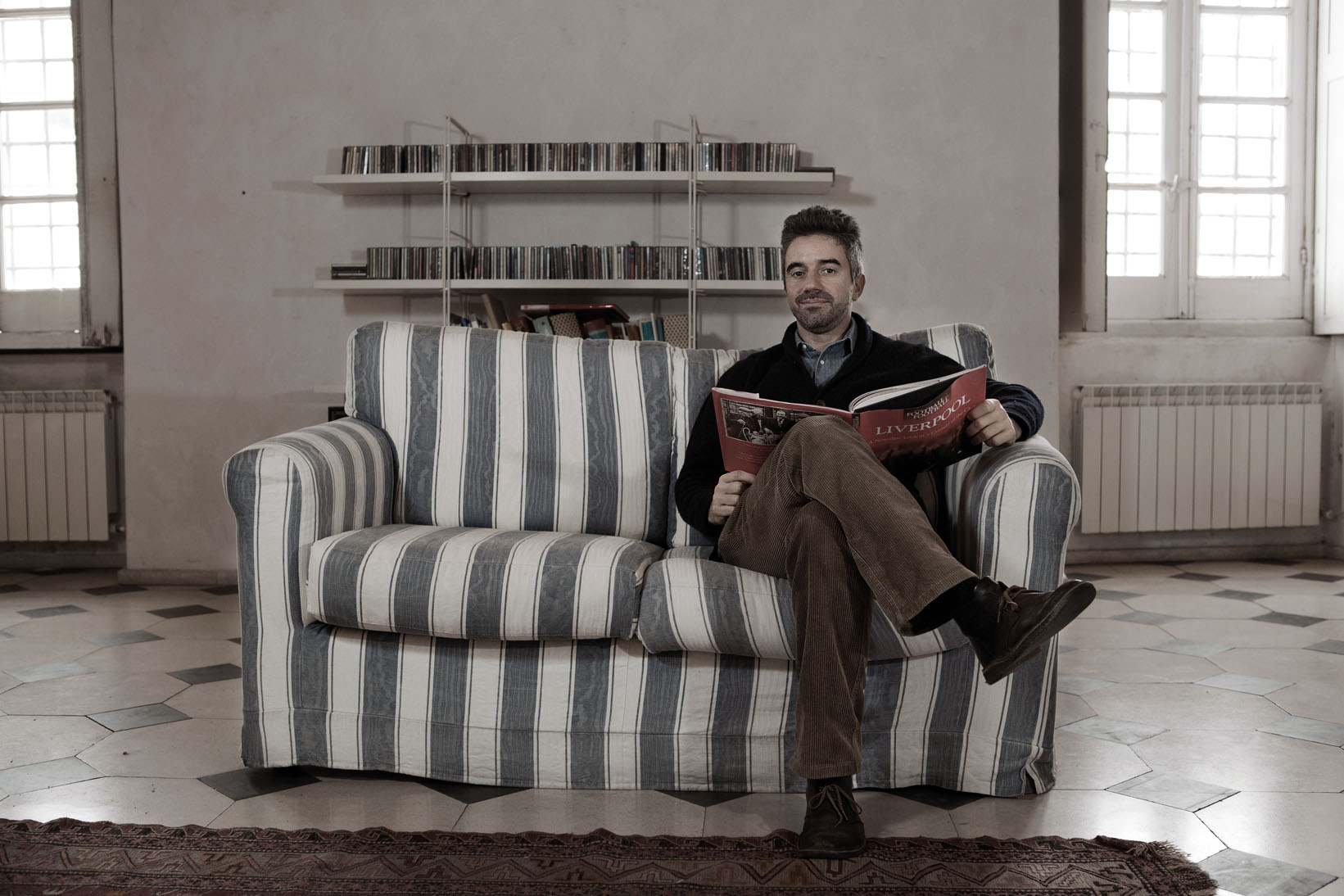 Lorenzo has a calm voice and an introspective character. His warm voice and his old-fashioned manners welcome you at Spensley’s, as he friendly puts a hand on your shoulder.
From his look and the tone of his voice (so gentle you barely remember the last time you heard it. Maybe you never did), you already get the philosophy of the company. 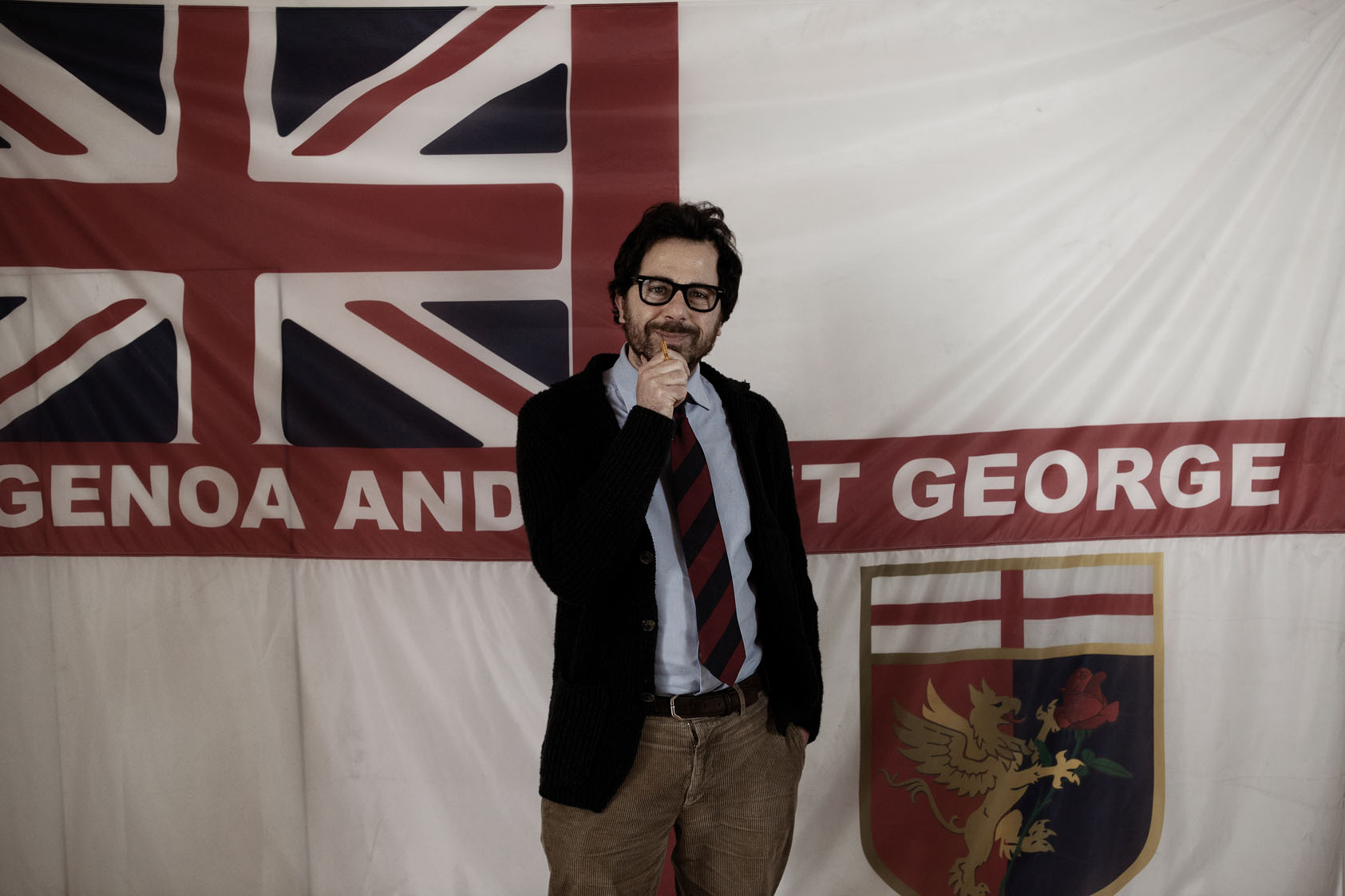 Maurizio, called Mons, has an elegant “vintage” soul and a noble spirit. His beard is well groomed and his look is romantic. He doesn’t just designs shirts at Spensley’s. His mind grips an imaginary yellow-ochre pencil, the same colour of an old Koh-I-Noor, and he starts drawing mythological creatures into enormous flags and ancient crests adapted to the modern canons of beauty. 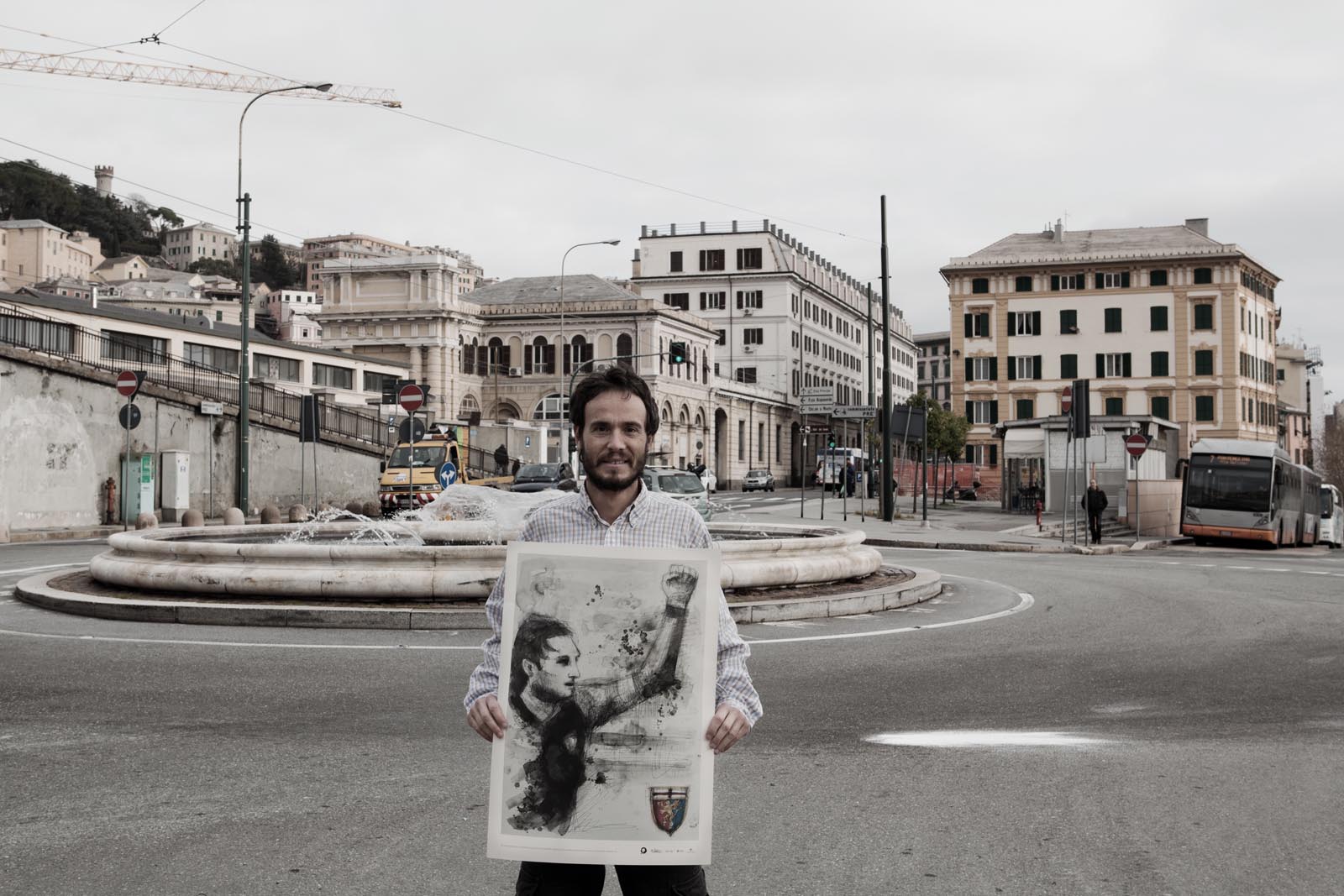 Davide, lastly. Maybe Lorenzo and Mons met him at the stadium or in the street. Doesn’t matter.
Well it does.
Cause the street is now Davide’s “workplace”. He has the difficult task to pass on the clients the company culture and concept, their understanding of modern football sportswear (and not only of sportswear).
There’s no better person to do this job.
He’s a passionate traveller, he’s experienced any possible way to meet new people and cultures, new approaches to life.
Son of the ‘90s inter-rail travels, he’s now a modern couchsurfer. He offers and takes hospitality, he shows to other ones and finds out himself how beautiful, fascinating and rich in stories the world is.

Culture, art, the search for “myths”

Spensley is so unique because it incorporates these three values into football.
At Spensley’s they’re really crazy. Thank God they are.
Many make football shirts.
We are used to see them at the stadium or on TV, when we watch the World or European Championships (events that seem to reinforce our Italian national feeling).
We hear comments about football shirts from sellers shouting at markets, we understand the shirt and that shouting are the symbols of an unconditioned love or just a national symbol.
Many make football shirts.
But nowhere like in the Palace of the Genoa Prince, Spensley’s seat, it is possible to conceive a football shirt such as theirs.

A Made in Italy changing colour

At Spensley’s they pursue details, the ones that appeal to the senses .Their research is as serious and accurate as possible. 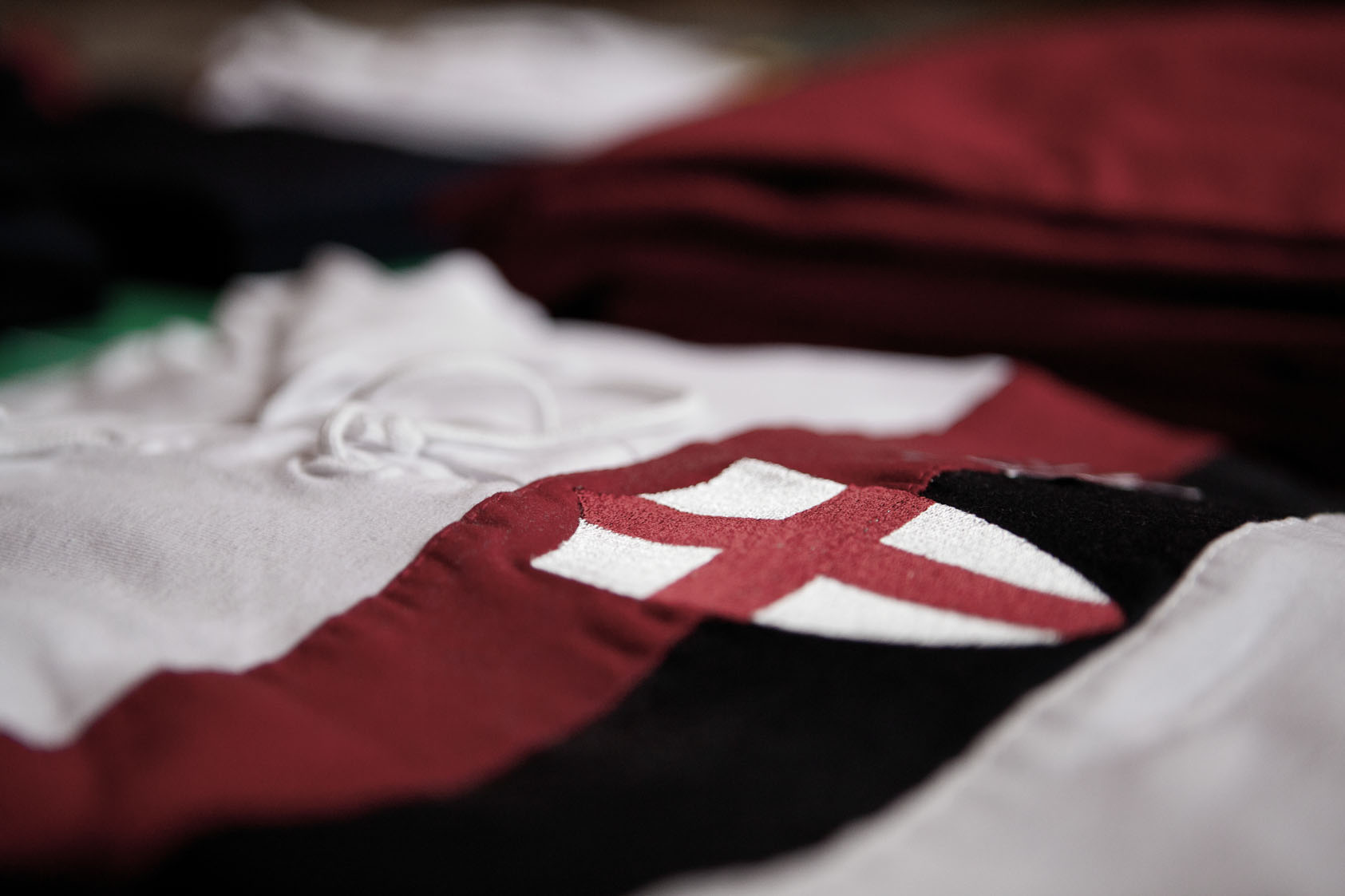 Let’s take colour, for instance. How many varieties of blue do we know? How many have been used throughout history in all existing paintings, in artworks of different ages?
Think of the use of blue among the Egyptians, the Romans or in the Middle Age up to Kandinsky and Hartung.
To recreate a shade of blue, red or white, exactly a particular one among thousands of the same chromatic scale is real mastery, it is art. Also because these blue, red and white don’t exist anymore.
Going back to the original old colours is usually the first step in the creation of a football shirt by Spensley.
A businessperson would immediately understand this is the height of creativity.
Something unique.
Only this would make it worth the effort.
But it’s not all.

The man, the myth, the infinite love

Spensley’s concept is even more exciting than this.
It’s a short-sighted approach, to think their work is just producing football team shirts.

Lorenzo spends lots of time “immersing” in old books about football and checking out in nostalgic websites.
He’s not just looking for information, he’s looking for a myth: the man, the footballer who made a shirt famous for years.
A myth is someone who makes you close your eyes and dream.
You see him dribbling through the opponents’ legs on a green square… and no matter how old you are.

Kids, adults, old people: such categories no longer exist. This is the time for dreamers, for those who, at least once in their lives, have wished to get out there and become like that footballer, to score the winning goal and make that Sunday special.
“Did you see where he put the ball? Right where the stakes cross!”
Where a myth is born, Spensley’s work starts: they try to recreate as accurately as possible the strip that belonged to him.

Let’s take Gigi Meroni for example, the “farfalla granata” (literally “the bomb butterfly”). As a young footballer, he used to play for Genoa, then he passed to Torino (led by Nereo Rocco at that time) and he lost his life right outside the Torino stadium, run over by a car.
Since then, his shirt is not just a football shirt anymore.
A myth can be born through a story, one gesture or a particular anecdote (tragic or joyful it may be) that makes everything different. And a myth’s shirt is the one that makes you imagine the sweat, that makes you recall the crowd shouting at the stadium.
It’s the one giving you the thrill: you get the shivers or you get scared thinking of the dozens of opponents being kicked every Sunday.

This is foot-ball. This is Made in Italy

I went out of that gorgeous building and my mind was so absorbed, so “outside time” that I imagined Lorenzo, Mons and David going to the stadium wearing their shirts under an elegant jacket.
Spensley’s work is actually showing how modern and fascinating can concepts such as historical research, elegance, quietness and slowness be.
Fans shall not live by shouts alone.
Not everything can “travel to the speed of light”.
It takes patience to see a team win a championship.
To see the myth of an immortal footballer being born.
To see the next football shirt by Spensley.