“F*ck, Francesco, we have to rush… every time we have an appointment with them, we’re late. You know they care about punctuality. Do you remember last time? Paolo read us the riot act for coming 15 minutes late!”

“Yeah, I know, Lorenzo, I know… but I can’t help it. I can’t come to terms with this “concept” of time, this invasion of digital hours.
I tried hard …and now, you know what I do?
Any object holding a number, anything looking like an “hour composition”, I turn it to the wall.
I prefer to see its back than its front, having to look at the plastic than at the display.
I’m searching for the “back” beat of time, you know?

“It’s curious, isn’t it? Every time we come to this festival, we spend at least one hour and a half on the queue to get the usual menu: “Pasta alla contandina”, two sausages, fries, red wine and the cake “Torta della nonna”.
Well, let’s join the queue, then!”
“By the way, Francesco, I finished that book you told me about.
But based on your description, I would have imagined a total different ending…”
…………………

“Hey, Lorenzo, how much time have we been here?”
“One hour and a half but it seems just 5 minutes.”
This is our time. Seconds disappears, the LED hands of the watch lose their form and our wrists become lighter.

Which time?
The time to be 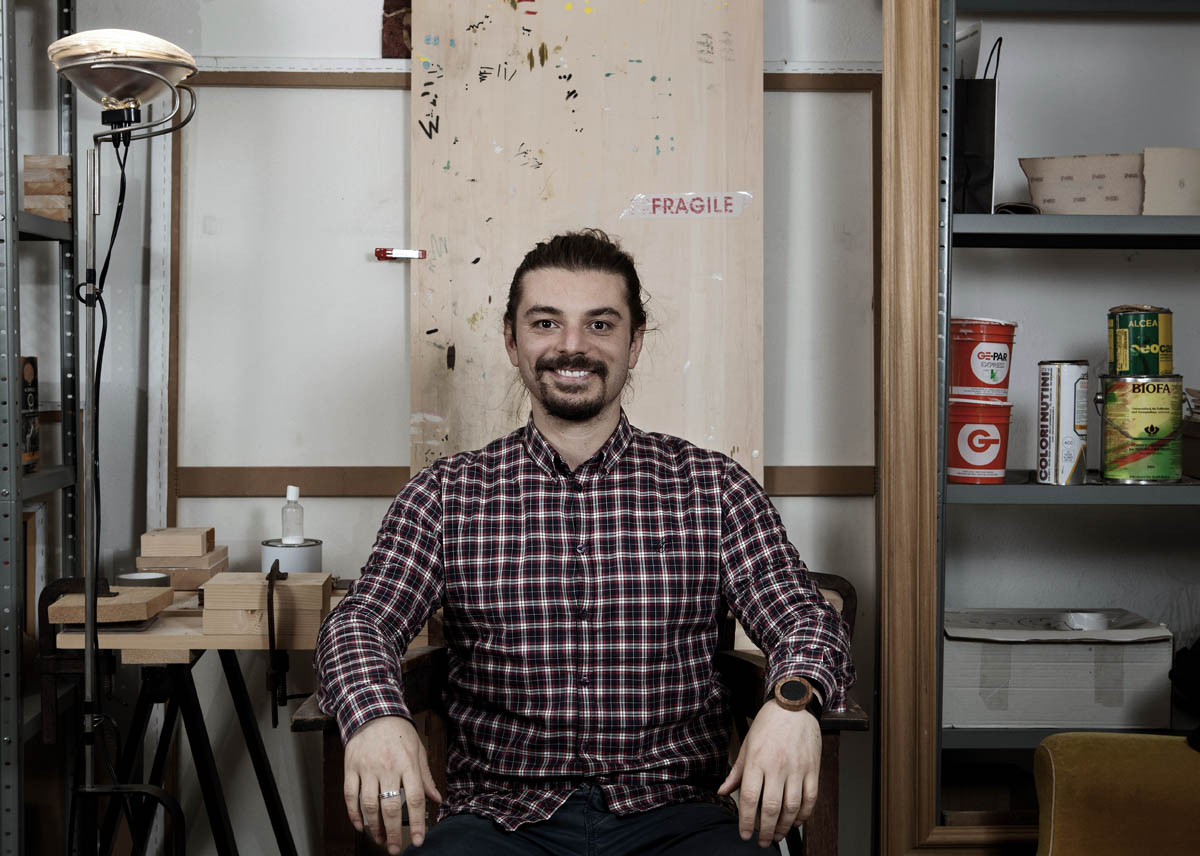 Francesco, sharp eyes and a warm smile, is Nullame’s practical side.
He’s often at the PC checking e-commerce orders or looking for some new retailers to spread the brand worldwide.

However, saying that he’s a concrete person mainly focused on business wouldn’t be a fair description. Actually his character is much more complex than this, or rather more complete.

He’s a dynamic, conceptual person who sticks to the rules and sometimes likes to break them. 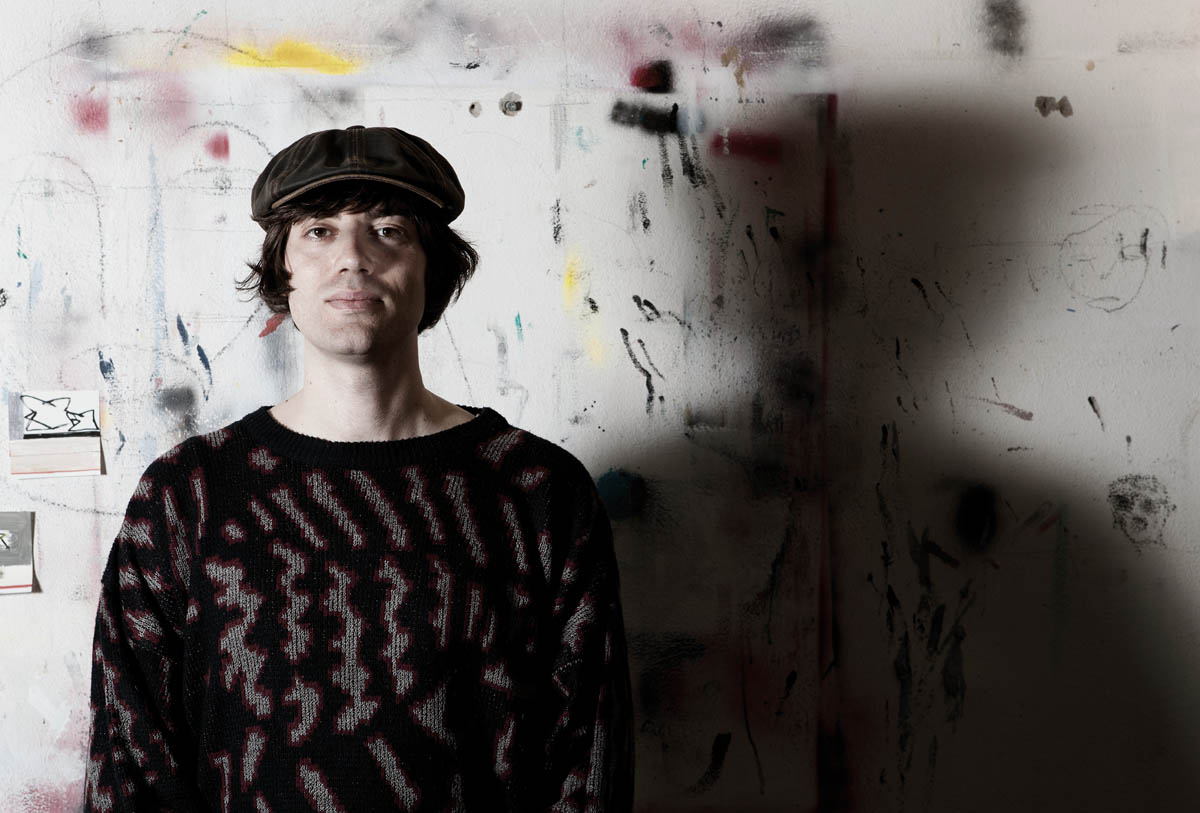 Lorenzo has a gentle soul, a pale skin and unusual features: he looks like he’s come out of some English punk band videos from the ‘70s.
He’s Nullame’s artistic soul.
And it’s no wonder, because he actually studied arts and design.

There’s something ethereal and destabilizing about him. It soon becomes clear, that he has a different approach from Francesco’s conceptual one.
For example you can’t ask Lorenzo to focus on just one point of view, to have just one still invariable vision, to make only one proposal.
He always has many ideas, and they converge into a single one only after a process of analyzation and elaboration.

Francesco and Lorenzo are Nullame’s protagonists.
Nullame is a company situated in the heart of Tuscany, whose brand mark is a new concept of time.
The name comes from two words and two sounds: “nil, nothing” (in Italian “nulla”) referring to the lack of something (e.g. the lack of watch hands and its symbolic meaning), and nature, organic materials, “leafage” (in Italian “fogliame”)

It’s there under your eyes. You feel a kind of attraction and repulsion at the same time, this watch is as inviting as irritating. Its originality shuts you up and makes you want to comment a lot at once.

We’re not used to such an object.
Imagine you see a house from the outside without a door.
Imagine you look up to the sky at night and you suddenly notice the moon is square, not round.
It would be shocking.
Boom! What would you do, if it really happened?
That odd moon would still be the moon… 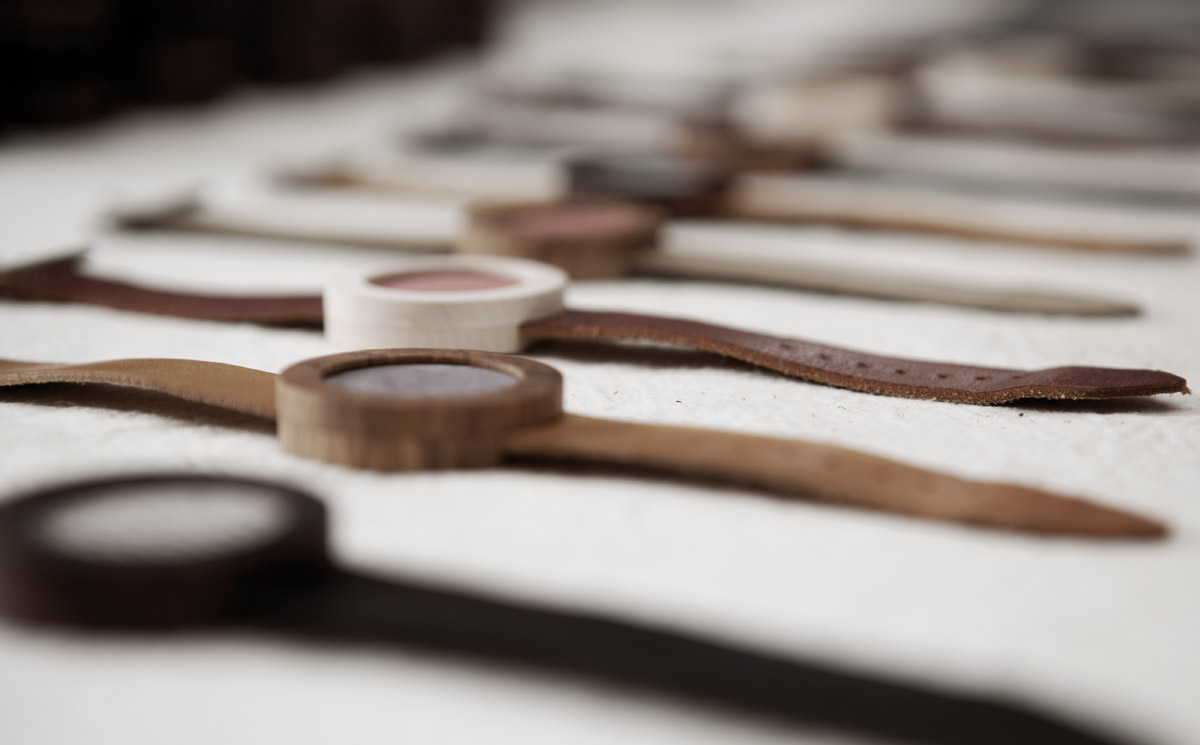 Removing from a watch-face its key elements, its hands, is acting crazy.
But right here, in this choice, in this new awareness of time, lies the essence of the company.
They want to step back from the time concept of our modern society.
They want to take back peoples’ time, which has been running faster and faster since the Industrial Revolution.

A watch losing its function
No hands. Just your own vision of time

At some point we realize, we can’t go on this way.
Time has become the major illness of “our time”.
But we’ve deserved it.
We’ve decided to “change” time, or rather to change its natural rhythms.
Once men would have a symbiotic approach to time, they were used to wait.
Now we’re greedy and we’re always trying to “force” it, filling it as much as we can. In the beginning was peace, now it’s anxiety. 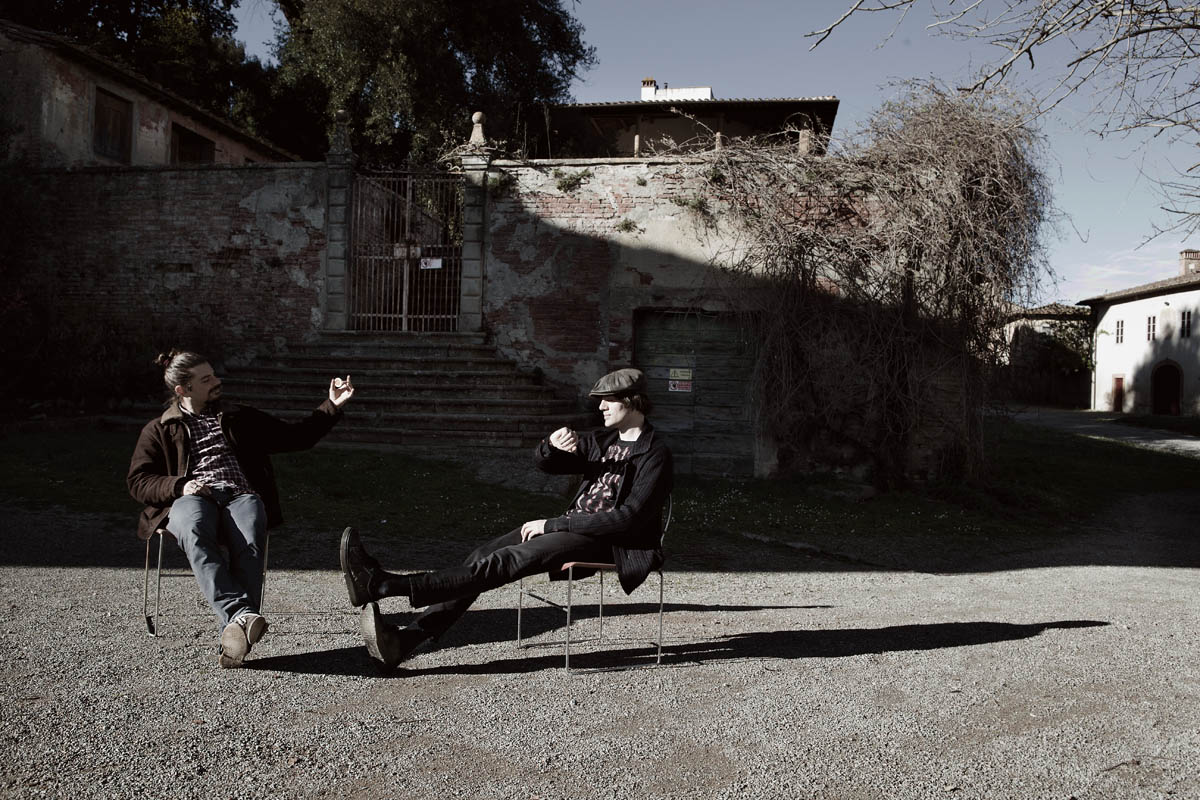 Where the heck are you running to?

“Enjoy the moment. You don’t need to look at the watch when you’re feeling good.”
This is Lorenzo and Francesco’s message, the message they want to give to those choosing a Nullame watch.

People wearing this watch are elevating the concept of time. Putting on a watch is no more a superficial every-day habit for them.

It becomes a deliberate choice: to ease the time burden on them, to give it less importance and power, to give it a less despotic, a more humble place in their lives.

The aesthetical function
Feeling the call of art… and distancing it

Obviously, a watch without hands loses its primary function, which is showing seconds, minutes, hours and days. Therefore, it becomes an accessory, an aesthetical object… and a subject of discussion.

Nullame watches have a lot to do with arts and aesthetics.

In fact, removing the hands from a watch and creating such a unique object is not just acting crazy. It’s an artistic challenge, similar to many other ones. Over the centuries artists have always taken “strange” challenges in order to shock the conscience of mankind.

As for the influence of aesthetics on Nullame’s work, you can see it in the attention to the materials, the colours and the packaging. 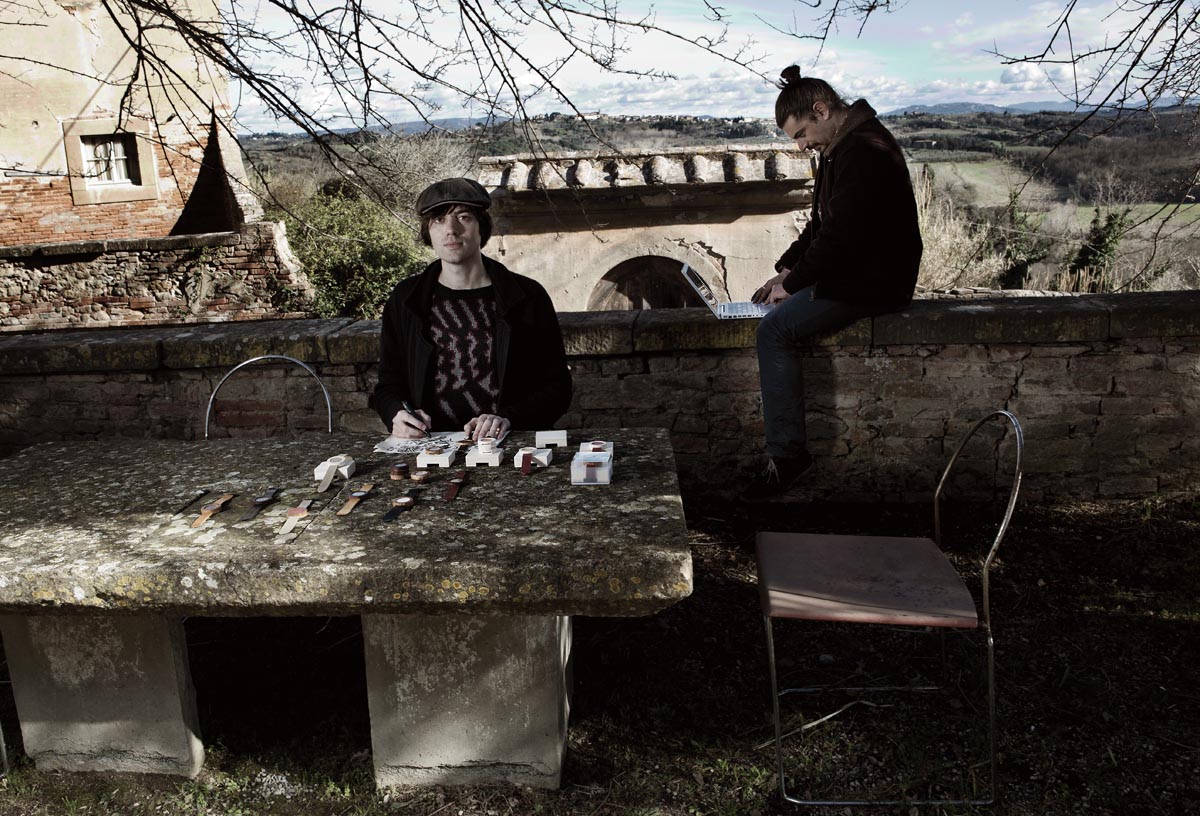 Arts and aesthetics for everybody. For many, at least

Arts have often gone wrong with something throughout history: they’ve been too elitist.
Francesco and Lorenzo want to bring art back to a more democratic dimension, industrializing (producing with their own hands) an affordable watch for as many people as possible.

Leather and wood: the natural “hands” of time

To go back to Nature means to find the original dimension of time inside Nature itself.
Due to the materials used, Nullame watches tend to change colour with time.
There’s nothing you can do about it: time flies by.
It’s nature’s own “hands” moving: they exist, they always did, you just have to be willing to see them.

Caring for aesthetics and Nature involves a rigorous selection of materials, but also a certain connection with the origins.

The Nullame project is also about going back to the origins. 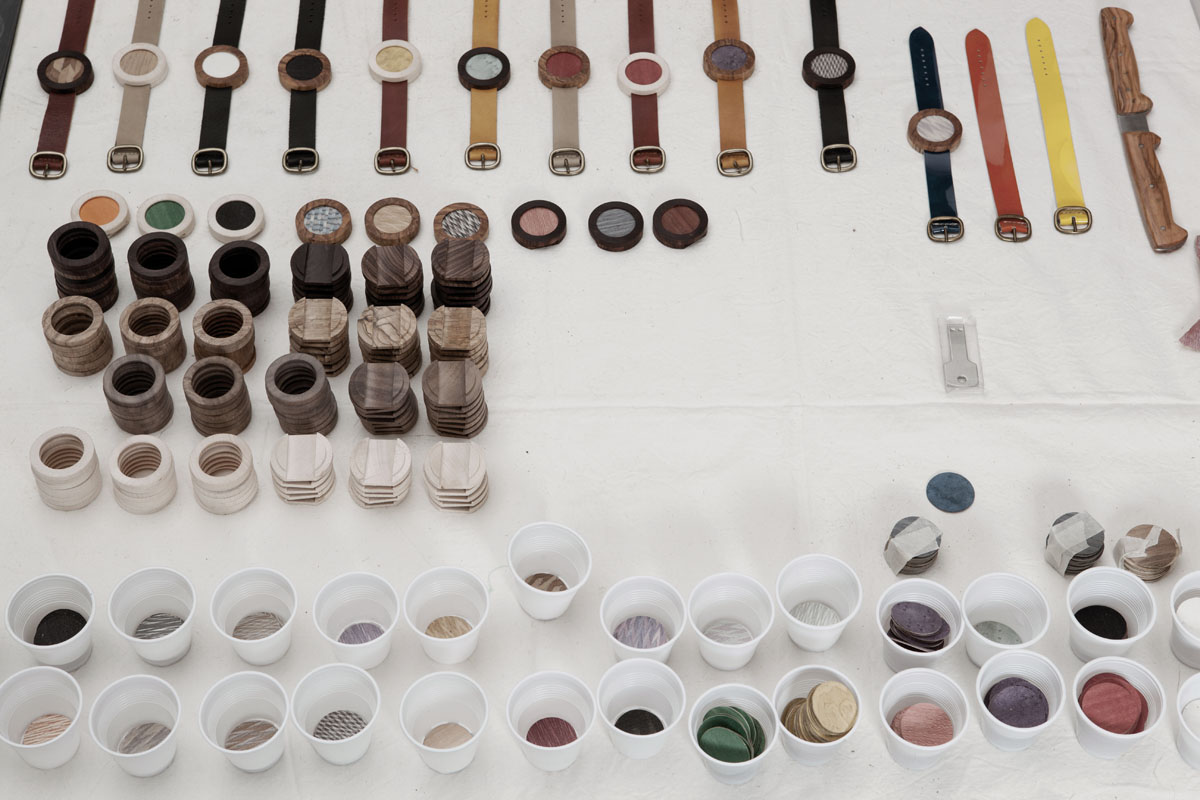 Lorenzo and Francesco’s products are 100% made in Tuscany and not just because they’ve both grown up here and currently live in the province of Pisa. They also want to enhance their territory. In fact, before most production was moved to the Far East, this was an important industrial area and many Italian manufactures used to be (and still are nonetheless) examples of excellence.

If it were your turn to decide, what would you go for?

Take your time in Nullame.