Italy. 8.05 pm. Dinner is almost ready.
Sara asks Mario to call little Pietro, put a bib on him and put him in his high chair: they’re going to have dinner.
Mario steps into his son’s room, lays a hand on his little shoulder. His voice saying sweetly ‘dinner’s ready’ draws the boy out of his work. Exactly.
Not out of his “playing”, but of his “work”, because little Pietro is very serious and focused, as he tests his abilities.
He uses all his senses and attention to create something wonderfully new every day.

Pietro looks into his father’s eyes, stretches his hand towards him while ducking under the table and inviting dad to follow him.
His initiative comes as a surprise for Mario, who hesitates at first. But then, he follows Pietro with a slight smile on his face.
Wonder. Magic. Happiness.
It’s like a dream, but it’s real. It’s not just realizing that things look so much bigger from below.

There is a whole new world to explore there.
The under-table world for example. Mario had never thought about it before.
What for Mario is something completely new is an everyday experience to Pietro, his usual point of view.
It’s the friendly surface he can touch or even hug. He can look or even wink at it.

Canada. 12/2/2010. 09.15 am.
Hans and Angelica are having two ‘caffè americanos’ at Starbucks before starting their workday.

Hans looks at his watch in a hurry: it’s time to go. But he notices Angelica is absorbed in her thoughts. Just the blink of an eye and she’s back to reality, she turns towards Hans and with a child smile on her face, she says: “Have we ever seen the world through the eyes of a child?”

Both Hans and Angelica are architects.
At one point in their lives, they decided to leave Italy. They moved to Holland, then to Canada, spent some years abroad growing personally and professionally, and came back with a clear mission statement: 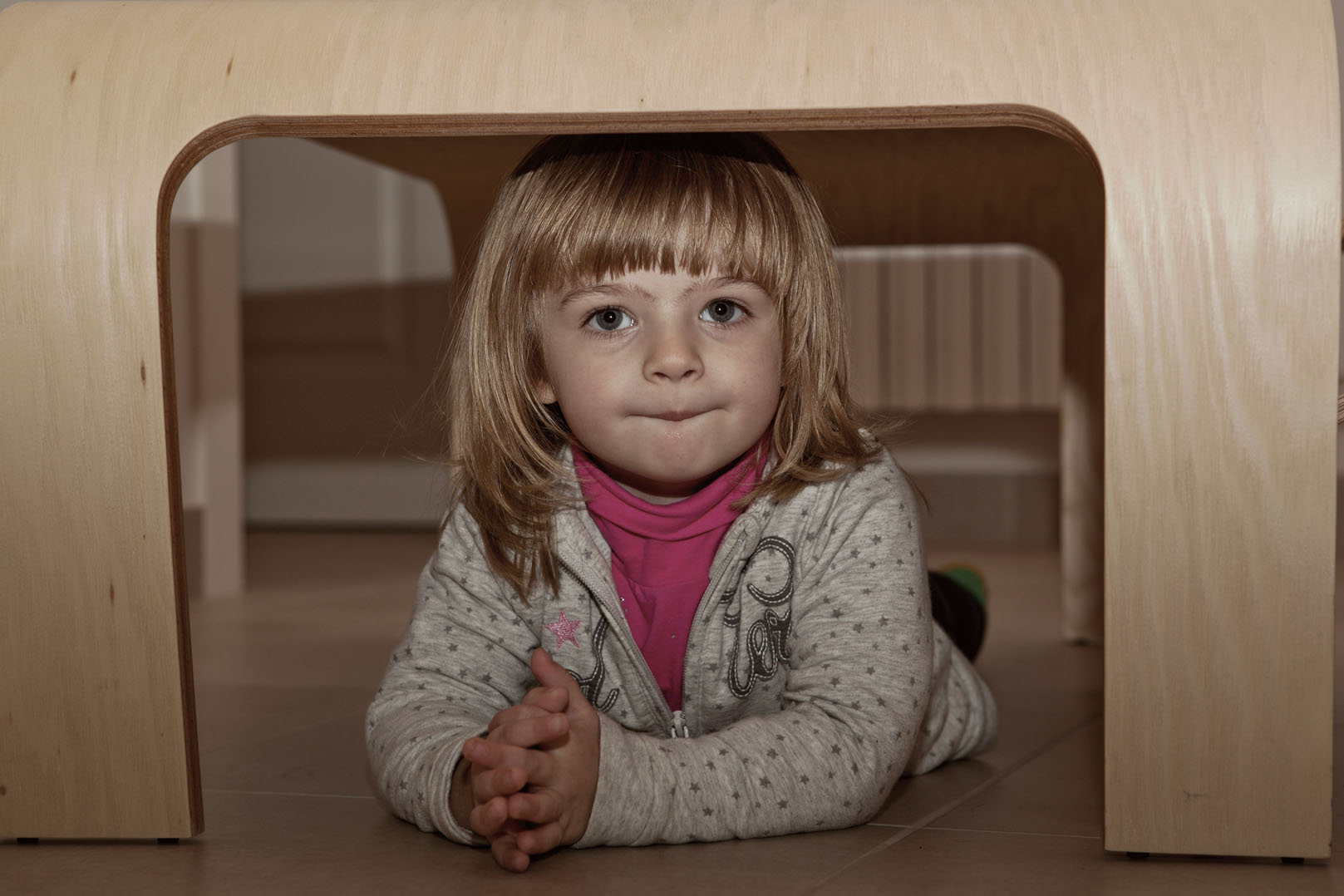 Not just some reduced-scale furniture, tables and chairs originally thought for adults, but tools specifically designed for children, for their growth, comfort and learning. As in the Montessori Method.

To focus on the very starting point of this project, we should ask a graphic designer to bring us back the portrait of Maria Montessori. A woman from the past century, but whose learning method and vision are still relevant today.

The figure of Maria Montessori, who made a revolution in children education, was somehow written in Hans’ destiny since the beginning. Both him and Maria Montessori were born in Chiaravalle, and Hans was conceived just a few steps away from her birthplace. 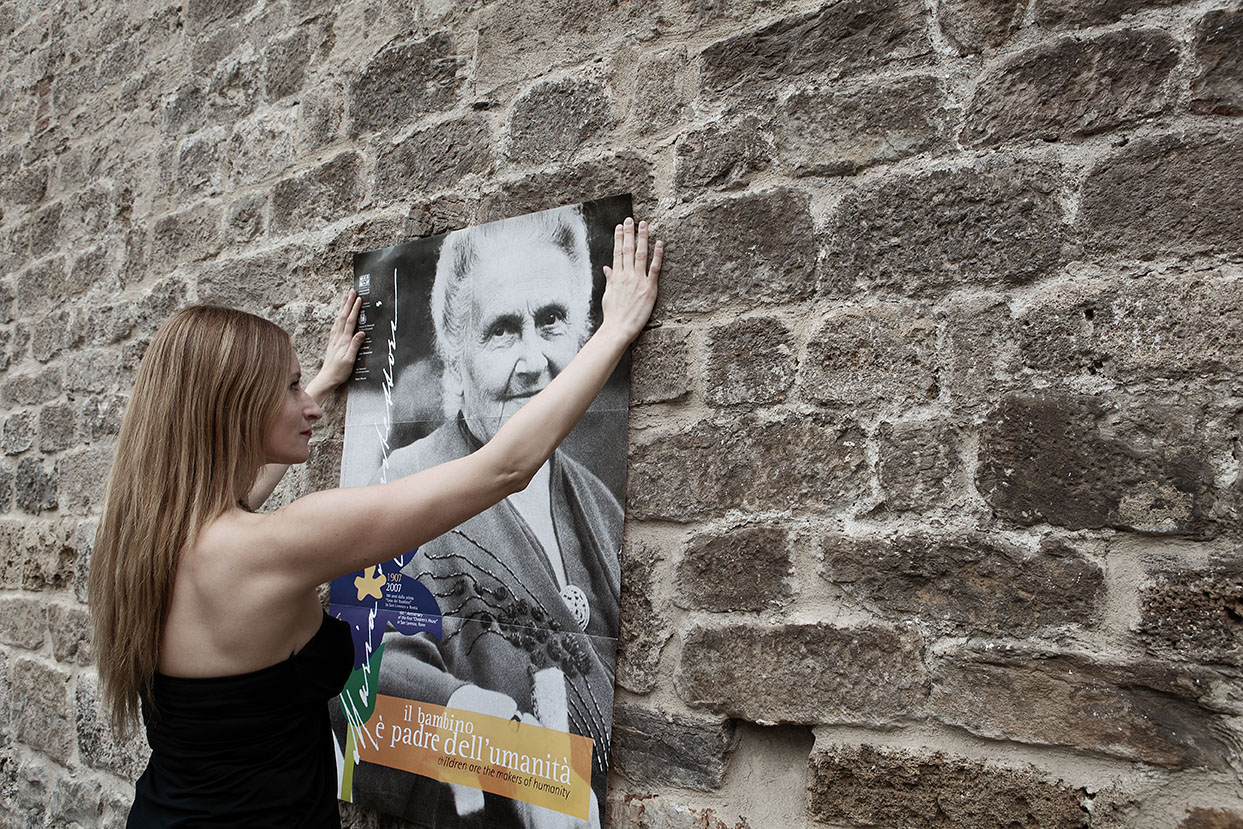 The famous Montessori quote “Let’s help them do it alone” has become Flowerssori positioning concept on the market. It has allowed them to differentiate clearly from other competitors, whose products mainly focus on the idea of the parents-children relationship.

The Montessori graphic learning board has been another starting point for them.
I think it perfectly expresses Flowerssori’s idea of Made in Italy: “If the time range where a child is at his best receptivity is only three years, then in that time we have to use all our tools (as technology and design) to make knowledge as simple, easy to use and child-friendly as possible.”

Made in Italy stands for creative genius, advanced original technology with a simple elegant design.
It means that their furniture is entirely produced in Italy.
Moreover, it represents quality; a quality Flowerssori pursue and maintain with no compromises.
The importance of quality also reflects on the choice of excellent materials (beech wood in the inside and ash wood, especially cut in a particular moment of the year, in the outside), no iron or plastic, and on the choice of using low-formaldehyde glue.
Wood, a ‘living’ noble material meant to last for a lifetime, is a synonym for quality itself.

Made in Italy, Quality and Storytelling strongly characterise the Flowerssori family and their “sons”. Here are four of their products.

A table looking more beautiful from below than from above 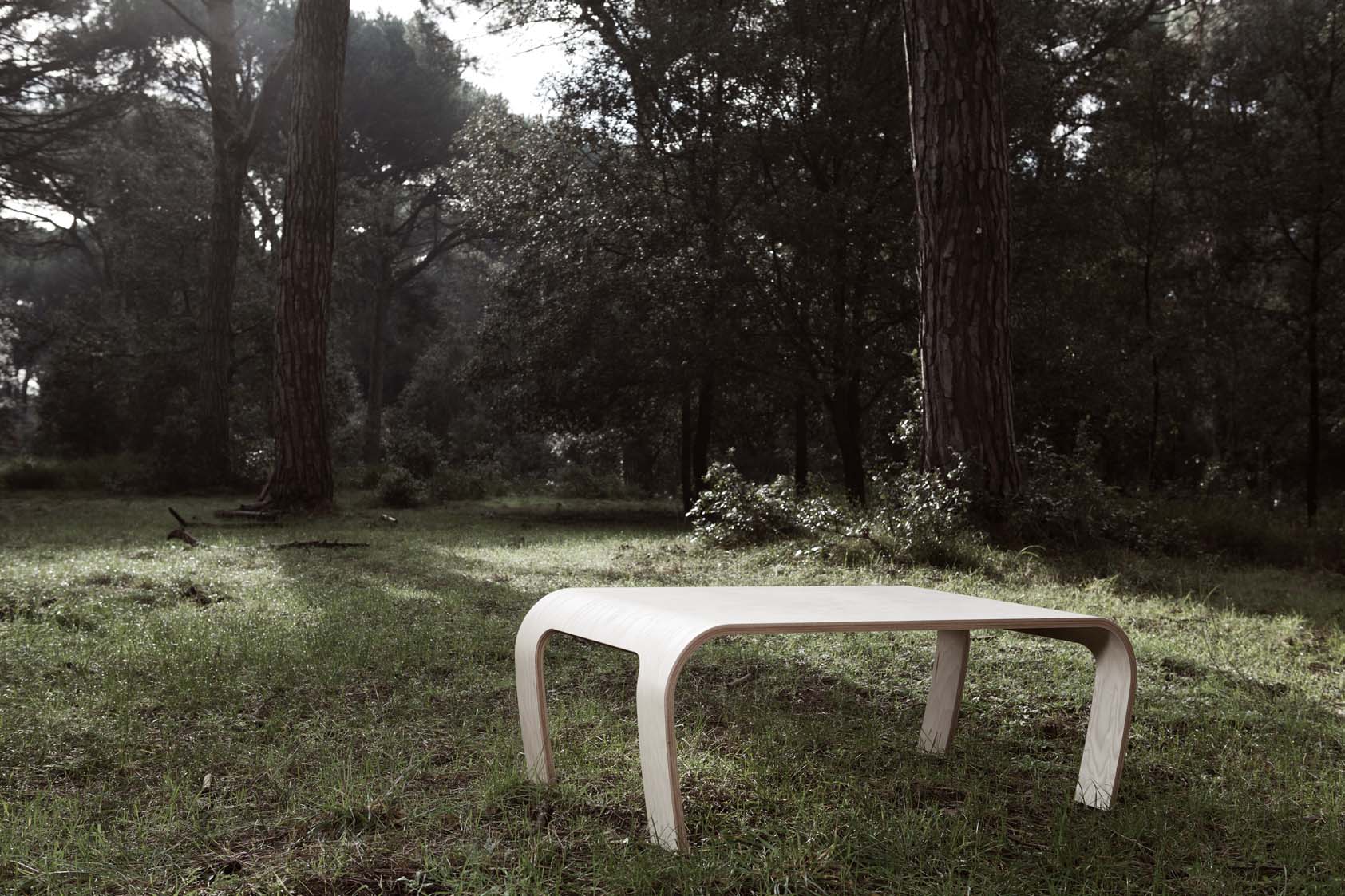 Children discover things from below because of their height and their way of exploring. Why not give them the pleasure of an object that is enjoyable from their point of view?

To learn three-dimensionality from the age of three 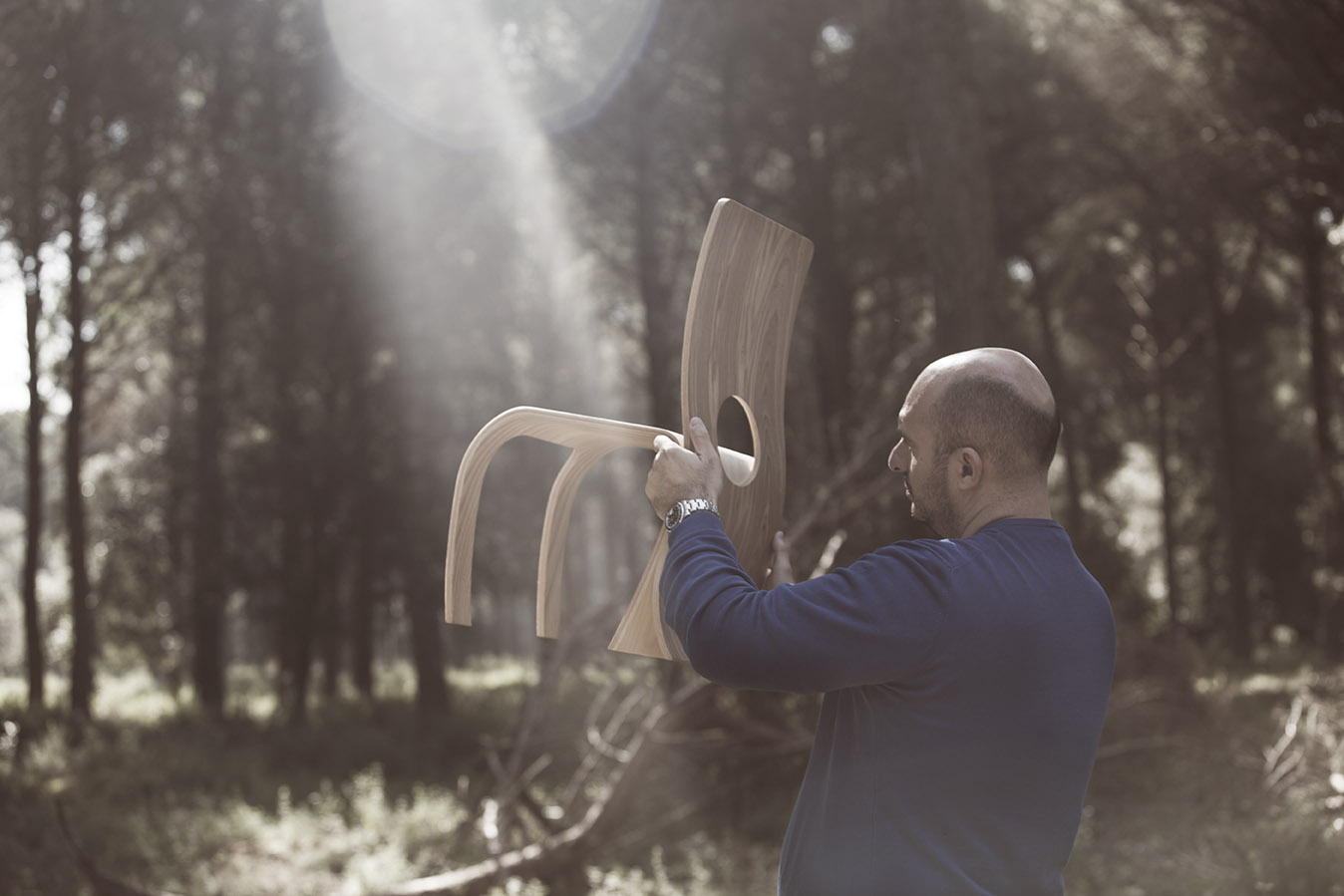 The presence of right and curved corners, as well as the light bouncing off the table surface help children identifying the shapes of the object.
They can experience their body in space, learning how the things are made and their boundaries.
The table is conceived as one continuous.

Children focusing on their activities get a deep satisfaction 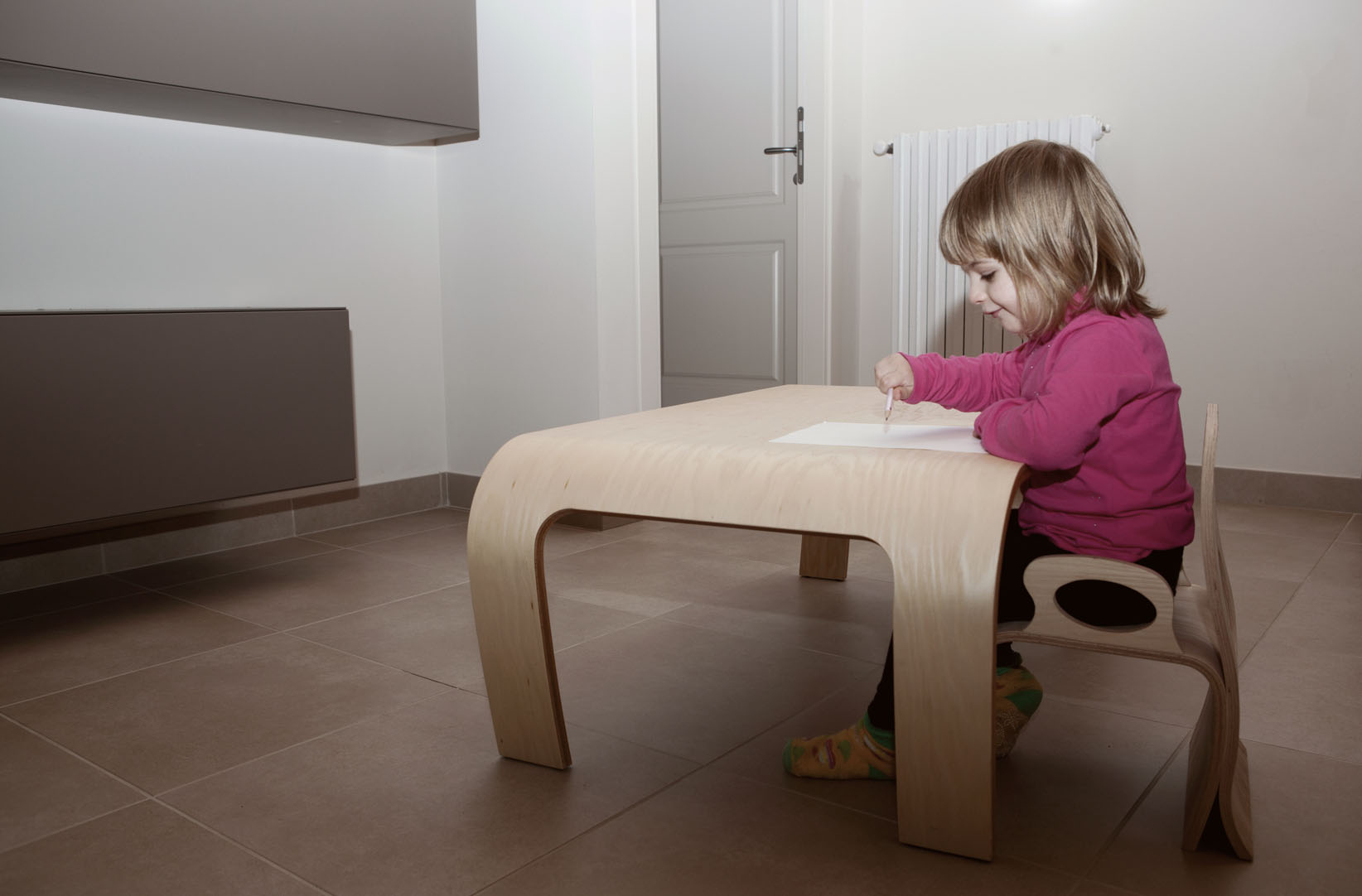 Moreover, they learn 20% more, when they are relaxed. Doesn’t “Made in Italy” include this?
Isn’t it also about designing products to help children relax? Let’s give two examples: 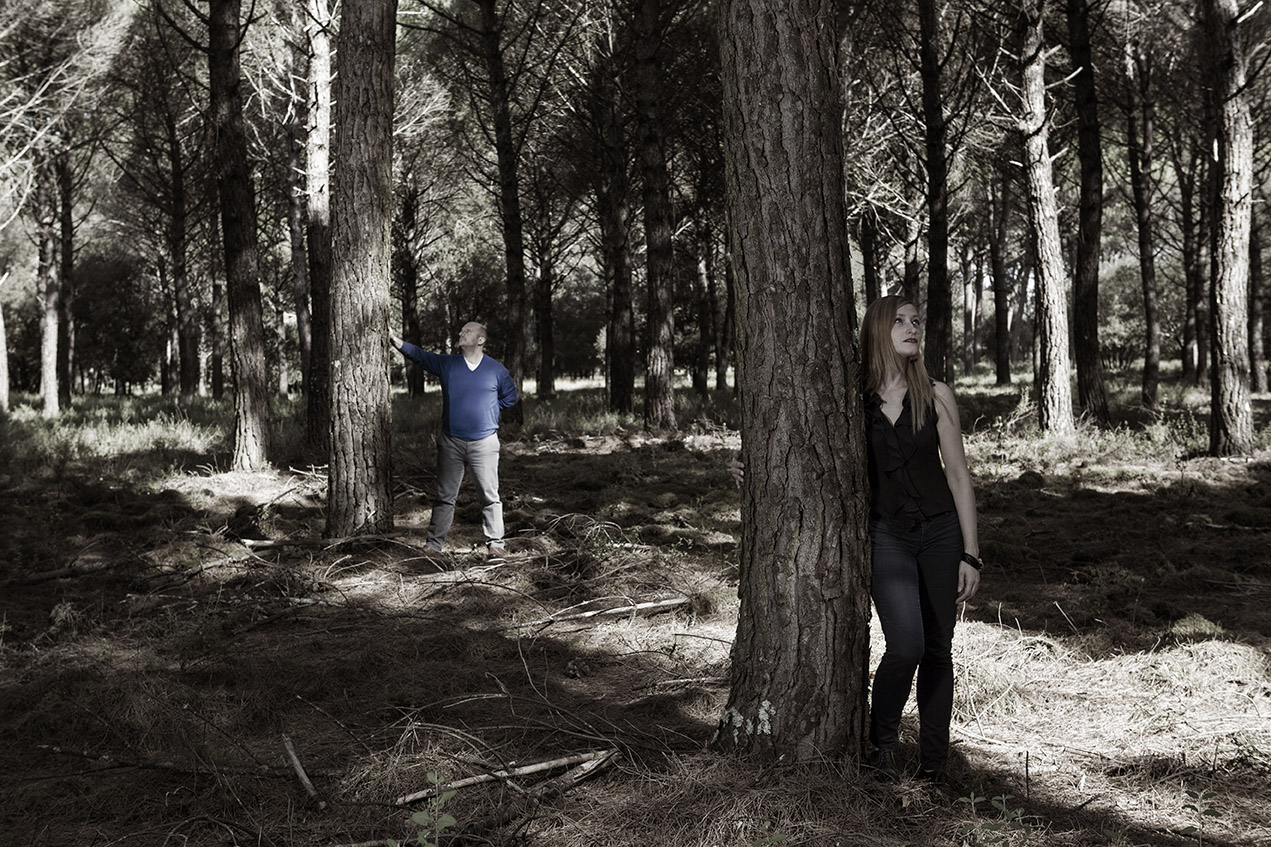 “We want to respect nature following its rhythms. We exclusively use ash wood cut in October, when (it’s) at its most beautiful. When its natural colour turns into golden and silver shades.”

This respectful approach to time has struck me.
Our industrial economic system has almost completely lost this dimension.
I liked and still like to think about Made in Italy also in terms of “photography”: there is a particular moment when a “story” is at its highest esthetical level, this is the right moment to tell it, and it must be caught through photography as well. Once it’s been cut and rolled out into a single leaf, this wood becomes a three-dimensional projection on two dimensions. This wood has a story, a story right before your eyes, laying under your hands.

Hans, Angelica, Flowerssori. You can find them here and in Pisa, where they work.
Or around Italy and the world, constantly travelling to take part in meetings, fairs and products promotion events.